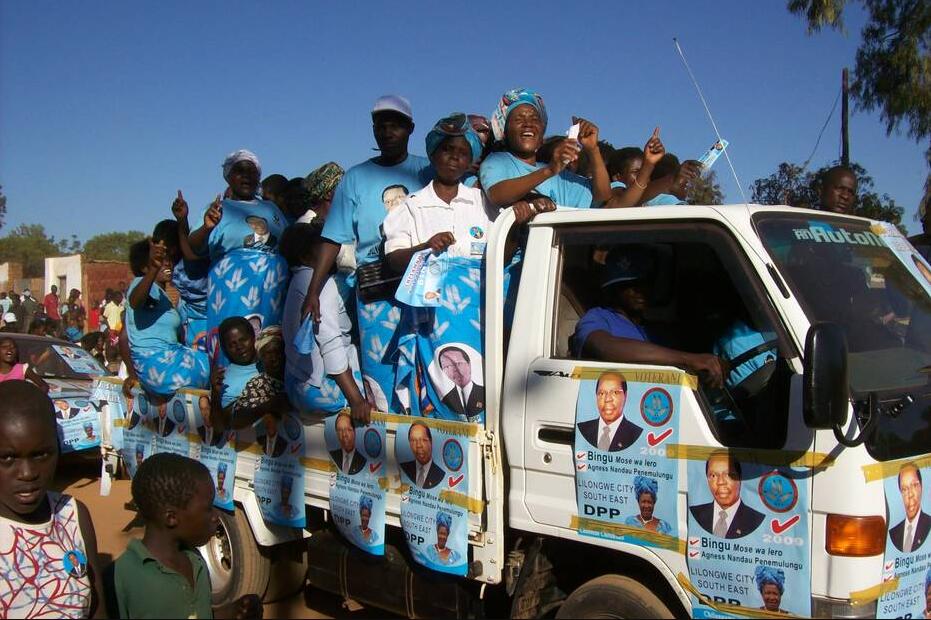 Malawi’s society is oriented along ethnic-regional lines. While the populous south mostly supports the ruling party DPP (formerly the UDF) (both Muluzi and Mutharika come from the southern region), the former unity party MCP has its stronghold in the central region. The MCP was led until 2013 by John Tembo, the longtime Gray Eminence behind President Banda. The sparsely populated north was previously politically divided between several parties, but in May 2009 it almost completely voted for the DPP.

In the presidential and parliamentary elections in May 2004 the candidate of the ruling UDF party, Bingu wa Mutharika, prevailed against a split opposition with a relative majority of 35% of the valid votes. However, his party only won 50 of the 193 parliamentary seats, necessitating the formation of a coalition government. This negotiated party leader Muluzi. The government initially had an absolute majority of the seats in parliament. After Mutharika left the UDF, his government only had about 36% of the MPs on its side.

In the presidential and parliamentary elections on May 19, 2009, Mutharika and his DPP achieved a landslide victory with an impressive turnout of over 78%.

The elections, which were also documented in a short film, were classified by international observers as generally free and credible. Nevertheless, there were (minor) complaints that were mainly due to technical problems.

For the first time since its foundation, the UDF entered the race without its own presidential candidate, as the top candidate and former president Bakili Muluzi was disqualified by the electoral commission a few weeks before the elections due to the constitution. The unclear article states that a president may only serve two consecutive terms, which he exhausted between 1994 and 2004. A judicial challenge failed three days before the elections. Muluzi’s calculation of supporting MCP candidate John Tembo turned out to be a grave mistake. The Tembo, considered to be incriminated from the Banda dictatorship, was not eligible for many Malawians. The DPP managed to break through the regional strongholds and was the only party to win seats in all three regions of the country. In contrast to Tembo, who had contested the election result in court – unsuccessfully – congratulated Muluzi Mutharika on his victory and declared that his UDF would support the government. He personally took part in the swearing-in ceremony of Mutharika, which was praised by the general public.

The presidential, parliamentary and local elections took place on May 20, 2014. Eleven candidates had been nominated for the presidential election. The outcome of the election was hardly foreseeable, which led to a confusing initial situation.

The election campaign was committed and peaceful. The most important competitors for the highest office of the state were the incumbent Joyce Banda (PP) and her challengers Peter Mutharika (DPP), Lazarus Chakwera (MCP) and Atupele Muluzi (UDF). The outcome of the elections appeared open, especially since a simple majority of the votes is sufficient for the election victory.

Election day was overshadowed by hitherto unusual major technical and logistical difficulties. Essential materials were not available at a number of polling stations, causing delays and rioting in some areas. In some of the 4,445 voting stations, the ballot had to take place or continue on May 21 and 22. A good percentage of the polling stations are said to have had irregularities. International election observation missions had come under fire for their early placet that the elections were credible. The turnout was over 70%.

After Mutharika’s leadership emerged, followed by Chakwera, according to unofficial results that were legally published continuously by the radio station Zodiak, President Joyce Banda caused irritation. On May 24th it had the elections annulled by decree and ruled that new elections were held within 90 days. On the same day, this decree was repealed as unconstitutional by the Supreme Court. According to constructmaterials, even the military, which in Malawi is considered to be the guarantor of the constitution, felt compelled, coup rumors to deny. A full-blown legal dispute broke out between the alleged election losers and the election commission or the DPP and was ended at the last minute by the Supreme Court on May 30th. This decreed that the final results must be announced within the statutory period, i.e. on the same day.

Peter Mutharika was declared the election winner shortly before midnight on May 30, 2014 and was sworn in as the 5th president the following day in Blantyre. His opponents congratulated him. However, the MCP initially announced a lawsuit to challenge the election result, but then waived it “for the sake of peace”. Despite all the quarrels, the peaceful change of government at the ballot box was a success.

The results of the presidential and parliamentary elections were published in detail by the electoral commission.

The ruling party DPP won 49 seats, followed by the MCP (48 seats), the superseded ruling party PP (25 seats), the UDF (14 seats) and two small parties with one seat each. 53 independent candidates made it into parliament. The 50th seat for the DPP, which Peter Mutharika had won, was advertised for by-election because of his election as president. In another constituency, elections were held in October 2014. Both seats went to the DPP. The government’s ability to hold a majority was shown in the unanimous approval of the state budget for 2014/15 amounting to K 742 billion and the state budget for 2015/16 amounting to K 930 billion. On July 1, 2016, the budget for 2016/17 in the amount of K 1,149 billion was unanimously adopted after difficult negotiations, as was the draft budget for 2017/18 with a volume of K 1,300 billion (approx. EUR 1.63 billion). The draft budget for 2018/19 envisaged total expenditure of K 1,504 billion (approx. € 1.77 billion). The education (11%), agriculture (10%) and health (5.8%) sectors represented the largest individual budget positions.