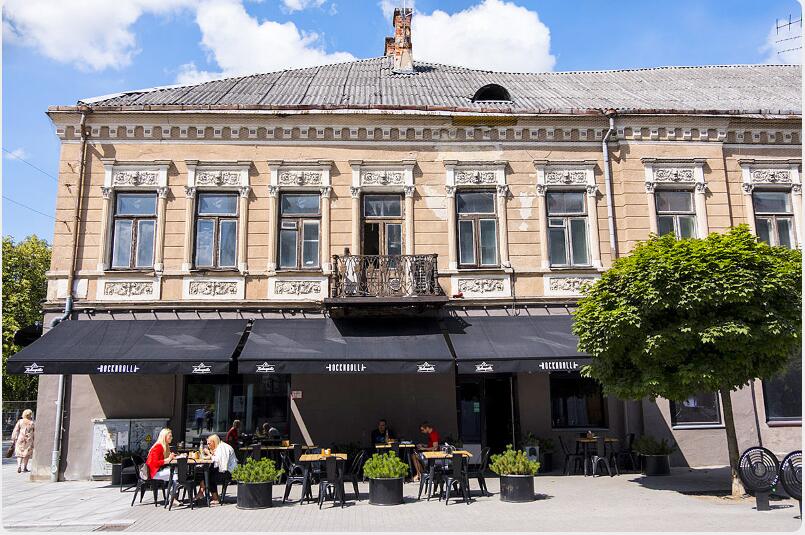 If you want something other than Lithuanian or Italian cuisine in Kaunas, there is a Georgian restaurant on the main boulevard, Mtevani . It serves typical Georgian food at reasonable prices, and Georgian meat dumplings called khinkali, for example, which, although you have to wait half an hour, have been on the minds of many.

There are quite a number of restaurants along the main boulevard, and there is also the Hesburger. The street offers inexpensive lunches during the week at lunchtime, and those who want to save on spending head here for lunch. For dinner, there are a variety of places along the street and, after a meal, also bars and cafes, and one area with centrally located restaurants and bars is the square formed around the large church. Restaurants on the outskirts include Nuogas , which serves Thai and other Asian dishes, and Amber Grill , which mainly serves steaks and grilled meats.

In the new parts of the city center, there are some restaurants and other eateries in and around the Acropolis shopping. The mall itself has cafes, a Hesburger and some other fast food outlets , but quite close to it is a decent restaurant, a local institution that has been in operation since the 1960s, Saslykine Zaliuke . It is a predominantly Georgian restaurant that also serves all-Caucasian saslik, kebabs and other similar dishes.

If there is a bus station , it is not far from the mall, but if you do not bother to walk a few hundred meters, there are a couple of kiosks at the station where you can get breakfast or a snack. Next to the station itself are a couple of Italian restaurants, of which Mamma Pizza is one of the most popular pizzerias in town. If you want to see more restaurants, there are them on the same Vytauto Street , which takes you from the bus station to the train station, and you can get Asian and other dishes.

Food is served in the restaurants 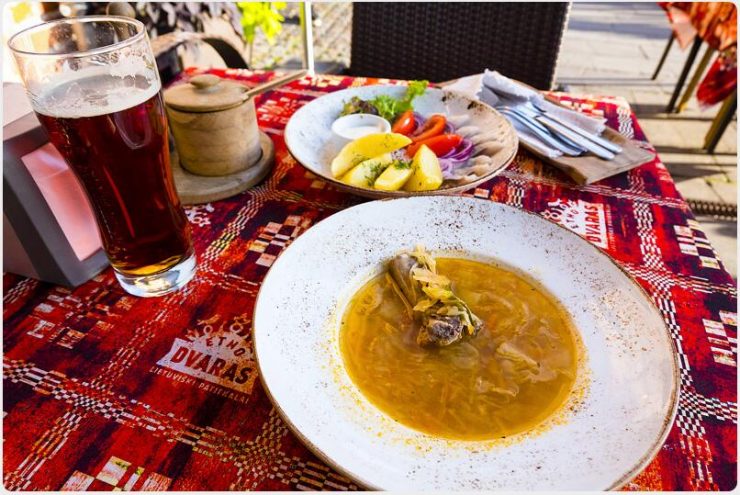 The restaurants in Kaunas are best served with Lithuanian cuisine, Italian cuisine, dishes from elsewhere in the former Soviet Union, of which Georgians are the most common, and, quite well, Asian dishes. Burgers and some other trendy fast foods are common, but they may not be worth eating in Kaunas, as there are good dishes for a meal that you can’t get anywhere in Finland. There are also some Indian dishes in Kaunas, a couple of which are vegetarian restaurants, and Asian dishes are especially recommended for vegetarians.

Lithuanian food has not become familiar in the world and almost nowhere else in Lithuania do you come across restaurants serving Lithuanian food. However, they are tasty and varied dishes that the majority of visitors like.

Most of the ingredients are of local origin, and the dishes are of course particularly well suited to the northern climate, but there are also summer dishes that include cold beetroot soup called “šaltibaršciai”, which is always served in Lithuania with popular boiled potatoes.

Some of the best-known dishes are potato dumplings called “cepelinai,” which are made from mashed potatoes or grated potatoes and have meat or vegetables added inside.

Various soups are popular and are usually taken as at least an appetizer, and good summer small dishes are herring and potatoes, which are offered in the Baltics a little differently than what is used in Finland.

One of the most popular dishes among foreigners is “blynai,” a kind of pancake that is usually made from potatoes, but there are two types, thin and thick. They are suitable for both main and desserts as they can be savory or sweet and are also a good snack.

Cheeses are also tasty in Lithuania, and it is popular to have a plate of cheese with beer, and sausages are also popular with beer. 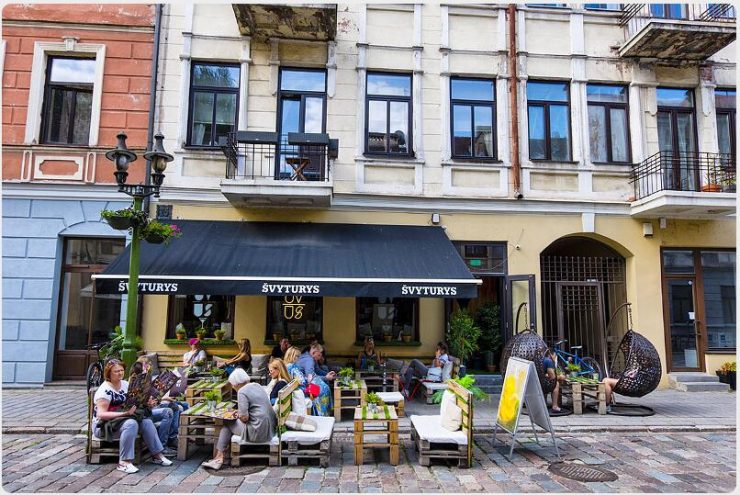 If you want tasty vegetarian dishes made in the Indian style and at reasonable prices, there is Radharanė both in the old town and on the new side of the center. It has a point at 40 on the main boulevard and another at the main locations in the old town. They offer similar, Indian-style dishes, including a large lentil soup for a couple of euros and main dishes that cost 4-5 euros, among which everyone finds their favorite. In addition to restaurant food, the places offer pastries suitable for vegans as well, and juices, teas and smoothies are also good.

There are many other vegetarian restaurants in Kaunas that can be seen from Happy Cow.

The price level in Kaunas varies quite a bit depending on where the city eats. 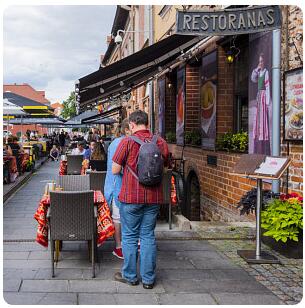 The old town is definitely the most expensive place for a meal and also a drink, but the food is still considerably cheaper than in Finland. Beer is available for 3–4 euros and main course is available for ten euros in many places, but in some places the price of a whole lunch or dinner with food drinks can rise to 15–20 euros. There are also affordable eateries in the Old Town, other than the main square and the main street, and the Indian Vegetarian Restaurant Radharanė, for example, offers lunch or dinner for 4-6 euros.

On the new side of the city center, prices are mostly lower than in the old town, but there are also restaurants along the main boulevard. If the restaurant is obviously Western or advertises itself in English, it is usually a more expensive place than usual, but they can also have lunch offers during the week, for those who enjoy it, they get their meal for 5-10 euros. Along the street, dinner can be eaten somewhat cheaper than in the main places of the old town, and there you can survive dinner with food and drinks for 10-15 euros, although those who eat steak or grilled meat have to pay 15-20 euros. The cheapest places are the cafes, many of which close at 7 pm to 8 pm, where you can dine for 5 to 6 euros, as well as the Indian vegetarian restaurant on the main boulevard.

Drinking money is not very common, but in table setting places where the service plays well in English, it is worth leaving a 5-10% tip. If the place is self-catering, there is no need to leave tips, nor are they left in bars or cafes.

The cafés open early in Kaunas, and you can go for breakfast from 7 am to 8 am in both the Old Town and the main boulevard . Lunch time has to start quite early, and even before eleven you can see the locals eating lunch. Lunch time lasts from 2 pm to 3 pm, and only a few restaurants in Kaunas close their doors in the afternoon. Dinner you can switch to enjoy from 6 pm, but the cheapest cafes and restaurants close at 7 pm to 9 pm and some on weekends as early as 6 pm. The actual restaurants are usually open until at least 10 pm, but some vegetarian restaurants close at 9 pm. , because although some restaurants are open from 11 pm to midnight, food is not very well served late and many places stop serving food from 9 pm to 10 pm.