The restaurants in Kaunas offer Lithuanian cuisine particularly well, but as elsewhere, Italian dishes, burgers and Asian dishes are popular. There will also be some Georgian and other Caucasian dishes, and overall, Kaunas offers a wide variety of dishes. Food prices are cheap in many places, but in the old town you have to pay more for your meal than usual. 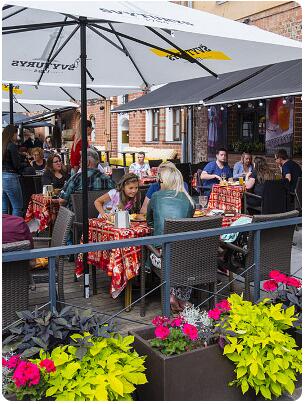 Best areas for a restaurant or other place to eat

The Old Town Square (Rotušės aikštė) is a place worth eating at least once during your stay. Its restaurants are diverse, and during the summer season, the Vilnius Street end of the square is filled with terraces.

If you want to eat an authentic traditional Lithuanian meal, Etno Dvaras Square is the best address. On its large terrace or in the atmospheric interior you can enjoy a variety of local dishes, including soups. herring meals and meat dishes such as steaks. The prices are by no means the cheapest in the city, but for Finns they seem reasonable. There are others next to the restaurant, but they are not guaranteed to be good food.

The best restaurant on the side streets of the square is M. Valančiaus gatvė, which starts at a few restaurants and cafes. It is a pleasant street with beautiful architecture, and one of the most striking buildings is the restaurant Bernelių Užeiga It also offers the cornerstones of Lithuanian cuisine, the service plays and the atmosphere is memorable. The beers are also good and many stay there for many hours.

The main street of the Old Town (Vilniaus gatvė) is not one of the best restaurant streets in the city, but there are quite a number of cafés, bakeries and bars along it. It has numerous attractive terraces, and some of the places offer food, but they are mostly burgers and other similar trendy dishes and often overpriced. Especially on this street but also elsewhere in the old town, the fact that there is an English name and advertisements in English means, without help, that the place is tourist-oriented and overpriced. One of the most popular places on the main street is the bakery café Motiejaus kepyklėlė , known mainly as a breakfast place , which is so popular on many mornings that a queue forms on its counter.

Some restaurants like Indian Vegetarian Restaurant and Gastropub Hop Doc are on the next side street called M. Daukšos . The Gastropub mainly serves burgers and other trendy dishes, but its taps are drained of excellent brewery beers (3-4 euros per half liter).

After a side street, Vilnius continues to be even busier, and there are also restaurants among the many bars and cafés. If you don’t care that the meal is a little overpriced, there’s an Italian Casa della Pasta on the street, for example , where you can find pizzas and pastas that are considered excellent. Shortly afterwards comes Rhodes , which conjures up Greek cuisine , and quite close to it is the most popular and finest restaurant on the street. Senieji rūsiai is an elegant restaurant in the old cellars, although the confusing menu did not appeal to everyone.

There are some restaurants elsewhere in the old town , and you can explore them from there as you explore. One restaurant that also has a point in Vilnius may be of interest to pizza and pasta lovers, and that is Jurgis ir Dragonas , which is on the next street.

A new side of downtown

If you want to walk from the Old Town to the new parts of the city center, you have to walk Vilniaus gatvė away from the main square and go through the underpass in front of the Presidential Palace. The street continues under the same name to the new side of the city center, which at first is not much different from the old town, but which soon acquires completely different and much more mundane features. There are no good places to eat along the new side along Vilnius, but Numan, which is around the corner, has received a lot of positive reviews with its varied food and special decor.

Vilniaukselta can seamlessly turn to the city’s new side of the main boulevard, named Laisvės. It’s the city’s most versatile street for a meal, but some of the restaurants along it are closed on Sundays. The street continues for almost two miles, but many of the best restaurants are close to the one in the middle of the street church, which is almost one and a half kilometers from the old town.

For those who want to save on food, there are numerous cafes along the street, which in Lithuania often also serve as self-service restaurants. They make breakfast, sandwiches and salads, but many also offer hot dishes for between € 3 and € 5, which are best suited for breakfast or lunch. They are quite popular at noon, as their price level suits the purse of the locals. One such is 101 Kepyklėlė at 42 street, which, like many other street cafes, closes at 7pm during the week and even earlier on weekends. Another café of the same style is near the old town, Prezo at 97 street.