According to CONSTRUCTMATERIALS.COM, Uganda is a country located in Africa. The spread of daily newspapers in Uganda is modest (2 newspaper excl. Per 1,000 residents, 2000). The most important newspaper is the government agency New Vision, published in English in Kampala (edition: 40,000 copies). Other major newspapers are Taifa Uganda Empya (approx. 25,000 copies) and the Catholic Church’s Munno (approx. 7,000 copies), both published at Luanda in Kampala. The press is considered relatively free, but it appears that regime-critical newspapers are banned.

State Radio Uganda (founded in 1954) broadcasts in two channels in 24 languages, including English, Luganda and Swahili. Uganda State Television (started in 1962) broadcasts mainly in English in one channel. Uganda also has private radio and TV. There are 127 radio and 27 TV receivers per 1,000 residents (2000).

According to ALLUNITCONVERTERS, Uganda has a rich oral storytelling tradition that today lives on in a thriving theater scene. There is an active national theater in Kampala. Uganda has some of East Africa’s most influential playwrights, notably John Ruganda, Murry Carlin and Robert Serumaga.

The country’s foremost writer is Okot p’Bitek. He reached a large audience with his breakthrough song Song of Lawino (1966), a long poem combining African storytelling tradition with Western influences. The poem was originally written in the language of Acholi, while the sequel Song of Ocol is written in English. A recurring feature of Okot p’Bitek’s poetry is sharp, often satirical, criticism of Westerners and their influence in Africa.

Popular music is influenced by Congolese music such as soukous. Uganda’s internationally best-known musician is Geoffrey Oryema, who mixes traditional African music, sung at acholi or Swahili, with pop and rock. Musician Philly Lutaaya, who died in AIDS in 1989, also had success in the West. Lutaaya, who for a time lived in Sweden, was the first known Ugandan to dare to say he was HIV-infected. It was of great importance for the fight against the disease in Uganda.

Rap star Keko is a big name in East Africa. Other big stars are Iryn Namubiru and Eddy Kenzo.

A film industry in Uganda is slowly being built up. In recent years, a series of low-budget films have been recorded in Kampala, which is described as a mix between western films and Chinese kung fu films.

Public video views are also popular. There are hundreds of video booths, bibands, around the country where entertainment films and sports broadcasts are mixed with informational films provided by government agencies.

Freedom of the press is enshrined in the constitution, but there are a number of laws that allow the state to intervene in the media. Journalists who have written on sensitive issues, such as corruption in the top state government run the risk of being arrested, beaten or exposed to other harassment. In connection with the elections, President Yoweri Museveni and his party favor NRM in state ethereal media. But some newspapers are rather on the side of the opposition.

It is mainly the newspapers that challenge power. The publication of the leading opposition newspaper The Monitor has been stopped several times and its journalists have been repeatedly imprisoned. It also appears that media are temporarily shut down by the authorities after publishing / sending inconvenient material to the government. Some of the violence against journalists also comes from ordinary citizens. Governors also use advocacy laws to silence uncomfortable voices. Authorities routinely refuse journalists to release material that should be public

There are several extensible laws that are used by the government to attack the media, mainly provisions on rioting, slander and a law on counter-terrorism, according to which information “likely to encourage terrorism” can provide up to ten years in prison. New legislation from 2014 also gives the authorities greater powers to monitor what is written online and to intercept mobile phones.

Even before the 2016 election, the authorities intervened in independent media, including the radio station Endigyito FMav of the authorities after sending an interview with one of the opposition candidates in the presidential election. At the same time, it was clear that the regime had failed to stop criticism of the government that came via social media.

The radio is the medium that reaches the most in Uganda. In addition to the state-controlled UBC Radio, the larger of the more than 200 radio channels, the private Radio Sanyu and the music station 91.3 Capital FM. Daily Monitor also broadcasts radio. A number of local radio channels have been started in recent years. Most of them are not particularly critical of those in power because they are driven by people close to the regime.

There are about 40 TV channels. The national channel UBC TV reaches Kampala and its surroundings. Even the private ones, NTV Uganda, owned by Aga Khan’s Kenya-based Nation Media Group, WBS, NBS and Bukedde TV have many viewers.

The largest daily newspapers include the English-speaking New Vision, where the government is majority owner. It still manages to maintain a relatively independent line, except in elections and political protests. Newspapers like Daily Monitor, Observer and Independent, contain more criticism of the government. Several new magazines have been started in the 2000s, including Red Pepper and Rolling Stone, with a great deal of sensation-oriented material.

President Museveni rejects Parliament’s request for a temporary halt to all new oil agreements, citing that the country cannot afford it.

Protests against inflation and corruption

A4C organizes new protests against high food and fuel prices (inflation in September was above 28 percent) and corruption. Protesters clash with riot police in Kampala.

Accusations that ministers received millions in bribes from the oil company Tullow Oil are leading a majority of the parliament to vote for a halt to all new agreements in the oil sector. This means that no new agreements can be concluded before new legislation is completed. At the same time, the MPs demand greater transparency in the government’s oil business and that the details of the settlement with Tullow Oil would be made public, and that the company’s sale of its shares in the French oil company Total and the Chinese CNOOC be stopped until a tax dispute has been resolved. They demand that all ministers who have been appointed for bribery leave the government. The ministers involved are Prime Minister Mbabazi, Foreign Minister Kutesa and former Minister of Energy Hilary Onek.

Behind the initiative in Parliament stands a group of young members, some of whom belonged to the ruling party while others are independent candidates.

Former Vice President Gilbert Bukenya is imprisoned (see May 2011). Three other ministers are also charged with corruption, including Foreign Minister Sam Kutesa, former Transport Minister John Nasasira and Labor Minister Mwesigwa Rukutana. Critics claim that the trials were a way to appease the donors by pretending to address the corruption in the country.

In the middle of the month, the prosecution is closed to five people who were suspected of involvement in the bombing during the 2010 World Cup because of a lack of evidence. Two people acknowledge that they had been involved in the attacks and sentenced to five and 25 years in prison respectively.

The government distances itself from legislative proposals against homosexuality

At the end of the month, the Cabinet, the government’s inner circle, will distance itself from the proposal to tighten legislation against homosexuality. However, individual MPs say they intend to continue pursuing the issue.

The vice president is dismissed

Besigye’s home is surrounded by police and the opposition politician is in practice under house arrest.

Up to the middle of the month, nine people have been killed and hundreds more injured in connection with the protests. According to the human rights organization Human Rights Watch, the victims were unarmed protesters shot to death by security forces.

More and more dissatisfied with the government

The authorities’ harsh methods seem to get more and more people to join the protests. Reports that Museveni spent $ 350 million on the election campaign earlier that year, as well as the decision to buy a $ 740 million battle plan, are furious.

Big protests against the government

On April 11, opposition politicians Besigye and Norbert Mao have been arrested since they called on Ugandans to walk to work to protest high food prices and large fuel increases (prices of some foods had risen by more than 30 percent in the second half of 2010). However, they are released against the bail. New events will be held later in several cities. In some places, clashes between police and opposition supporters occur. Besigye and other opposition leaders are arrested several times and released on bail. The government is also trying to prevent further protests by blocking social media on the internet. The allowance is made despite the fact that the demonstrations did not initially gather any large crowds.

Government in continued control of Parliament

In the parliamentary elections, NRM wins 263 seats, against 34 for FDC. At the same time, 40 independent members are elected to the House, many of whom have previously belonged to the ruling party.

The President is re-elected

In addition to Museveni, five candidates stand in the presidential election. The EU sends 130 observers to the elections. Museveni clearly wins with 68 percent of the vote, against 26 percent for Besigye.

The discovery of large amounts of oil in the country’s western part of 2009 is expected to provide the state with new revenue. However, the agreements on the emerging oil industry are surrounded by secrecy. The oil revenues give the president more opportunity to give generous election promises and before the election, the government side is accused of buying votes.

The government side has the lead in elections

Presidential and parliamentary elections will be held on February 18. Before the election, it is clear how much more resources the government side has compared to the opposition. Despite a dissatisfaction with the widespread corruption and shortcomings in health care, schooling, roads and electricity supply, the president is considered to be able to win votes on relative wealth (the economy has grown by 5-8 percent in recent years) and the relative calm that prevailed under his rule. In his election speeches, the president blames problems such as unemployment and the electricity shortage of the opposition which, according to him, has stopped his development plans.

LGBT activist David Kato is found murdered in his home. Just a few weeks before, he has won in court against the Rolling Stone magazine which published a list of gay Ugandans (see also Social conditions). 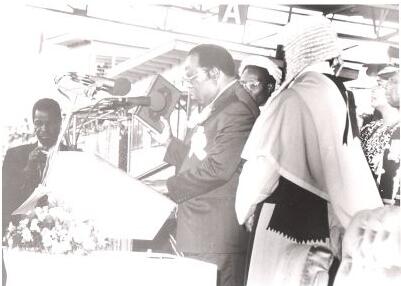