In northern Wyoming is the Big Horn Canyon Recreation Area. This area is administered by the National Park Service and extends into Montana. Not so long ago, the Big Horn River was dammed by the Yellowtail Dam. This created Big Horn Lake. The gorge in which this park is located offers you countless opportunities in the field of nature, history and recreation.

Big Horn Lake is approximately 114 kilometers in size. Because the lake is in both Montana and Wyoming, there are two visitor centers: one on each side. Here you can get information about the different animals that you will find in this area. This way you will find out, among other things, what the best places are to fish for trout, for example.

Get in your car and explore the Rocky Mountain region by car! Between the large National Parks Grand Teton National Park and Yellowstone is an atmospheric route. During your ride you will enjoy all the beauty that nature has to offer here. In 1972 the so-called ‘Parkway’ was laid to make a continuous whole of the two National Parks. The parkway takes you from the north of Grand Teton to the West Thumb geyser in Yellowstone for over 40 kilometers.

The Snake River is not lacking in the wildlife image of the National Parkway. The river crosses the area toward Jackson Lake. This section of the Snake River is a great place to hang out and who knows, you might catch a big trout that you can throw on the barbecue in the evening.

On the border between Wyoming and Utah is the Flaming Gorge Recreation Area. This area gets its name from the large red rocks that surround the area. The Flaming Gorge dam created the Flaming Gorge Reservoir. This is the center of the recreation area where you can camp and hike to your heart’s content. It is a nice area with a lot to experience, also in the field of water sports. On the nearby Green River, for example, you can step into your boat to enjoy rafting. If you are not into rafting, you can also fish well here.

In the Black Hills of Wyoming is the monumental Devils Tower. In 1906, President Roosevelt designated Devils Tower and the area around it a National Monument. The terrain consists of hilly and wooded area. What is special is that the 383-meter high Devils Tower seems to arise out of nowhere. This lava tower rises head and shoulders above the area. Native American tribes, who lived here long before Europeans discovered the area, had different names for the hill. ‘Bears lodge’ and ‘Bears tipi’ to name a few.

The origin of the hill is puzzling. It is thought that the formation has to do with the solidification of certain types of soil. Devils Tower consists of a number of layers of rock, the oldest rock dating from the Triassic period. Some researchers believe Devils Tower is a remnant of what was once a giant volcano. Others think it’s some kind of disturbance of magma in the Earth’s crust.

Anyway, today you can climb this ‘tower’. Keep in mind that it is quite a climb; it takes you between 4 to 6 hours! If you don’t like climbing, there are also other activities such as wandering through the pine forests and spotting wildlife such as coyote, hawks and different species of amphibians.

In southwestern Wyoming, in the cold sagebrush-covered desert, lies the Fossil Butte National Monument. Fossils of insects, plants, fish and mammals have been found here that are in very good condition. These remains tell us that in the past, strangely enough, a subtropical climate must have prevailed!

You can choose to discover this park on your own, but there are also American park rangers at your disposal who are happy to show you around. In the visitor center you first see the fossils that were found here. Then you dive into the park, on foot or by car. Are you curious and do you want to get to know the park even further? At the weekend you can even help archaeologists find ‘new’ fossils!

Wyoming is home to a sanctuary entirely devoted to the large group of elk that live there. This ‘refuge’ was established in 1912 for the moose, which are also called ‘wapitis’. In the past, Yellowstone elk migrated to southwestern Wyoming to winter on the vast grasslands. However, as the town of Jackson grew into a major city, it blocked the passage for the elk. The original number of moose is thought to have been about 25,000, but when their route was blocked, this number has been severely reduced.

Today, the moose have a vast area of ​​100 square kilometers of wetland all to themselves. At least, next to the bison, swans, sheep and, very exceptionally, a grizzly bear. If you’re here in winter, go sledding. Then tours are organized every day. Departure is from Jackson Hole. If you want to participate here, be there early. There is a ‘first come first serve’ mentality.

If you have seen enough of the moose, you can also fish here, especially for trout. There are special rules for fishing here, so be well informed first

Located in southwestern Wyoming is the 106 square mile Seedskadee Wildlife Refuge. The name of this reserve comes from the Native American word Siksa-dee-agie, which means ‘river of the prairie grouse’. The Shoshone Indians were nomads who moved here 700 years ago. They lived mainly on the meat of bison and pronghorn. However, the first traces of human inhabitants date from prehistoric times. In the 19th century, European poachers came to the area mainly for beaver pelts.

Near the reserve flows the beautiful Green River. The ground in this part of Wyoming is actually quite dry, but thanks to the Green River, many cotton trees grow here. If you like birds, Seeskadee is for you! Many different species live here such as hummingbirds, swans, ducks and yellow warblers. Handy fact: you don’t have to pay to enjoy this beautiful piece of American nature.

As an isolated island, the Black Hills Mountains lie in the middle of the Great Plains of Wyoming and South Dakota. This area came to the attention of many Americans in the 1970s during the gold rush that prevailed at the time. At the time, this area was important for mining in the US. Tourism is now the main source of income. This is partly due to Mount Rushmore, the famous National Monument with the four carved busts of the first four presidents of the US. 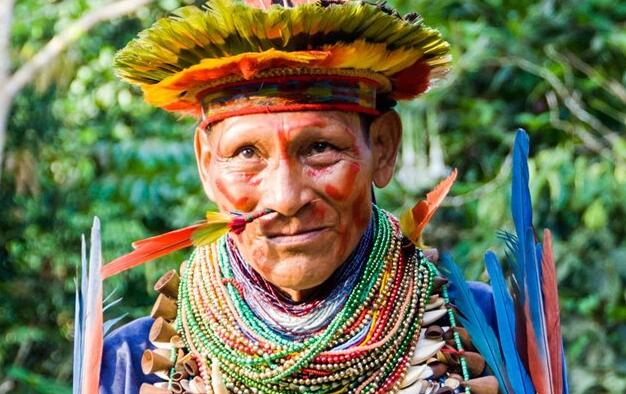